Nursery children told the nativity story in a festive film as they put on a Christmas show with a difference for their proud families.

Staff at Discovery Day Nursery in Park Wood, Maidstone, came up with the unique twist on the traditional festive celebration, which also saw the children using sign language while singing Christmas songs including Jingle Bells and When Santa Got Stuck Up The Chimney.

In the week before the Christmas show and party, staff filmed the youngsters telling the nativity story in their own words and turned the footage into a fantastic film, which was shown on a projector screen to more than 50 parents and other family members.

More than 30 children donned nativity costumes for the filming and showed off their best acting skills as they depicted the Three Kings looking for Jesus, the Angels announcing the Baby’s birth and all the other familiar scenes. The words they spoke were also written at the bottom of the screen.

The younger children were also shown in a film depicting a day in the life of a two-year-old at Discovery Day Nursery.

The children then sang Christmas songs and signed the words using Makaton, a language programme that uses signs and symbols to help people communicate.

Father Christmas dropped by to give the children a book each and stayed for a party, joining in with games including musical chairs and musical statues.

Guests wore colourful Christmas jumpers, and a raffle raised £71 for charity Save the Children.

Youngsters, their families, staff, and of course Santa, then enjoyed nibbles before finishing the event with the Hokey Cokey. 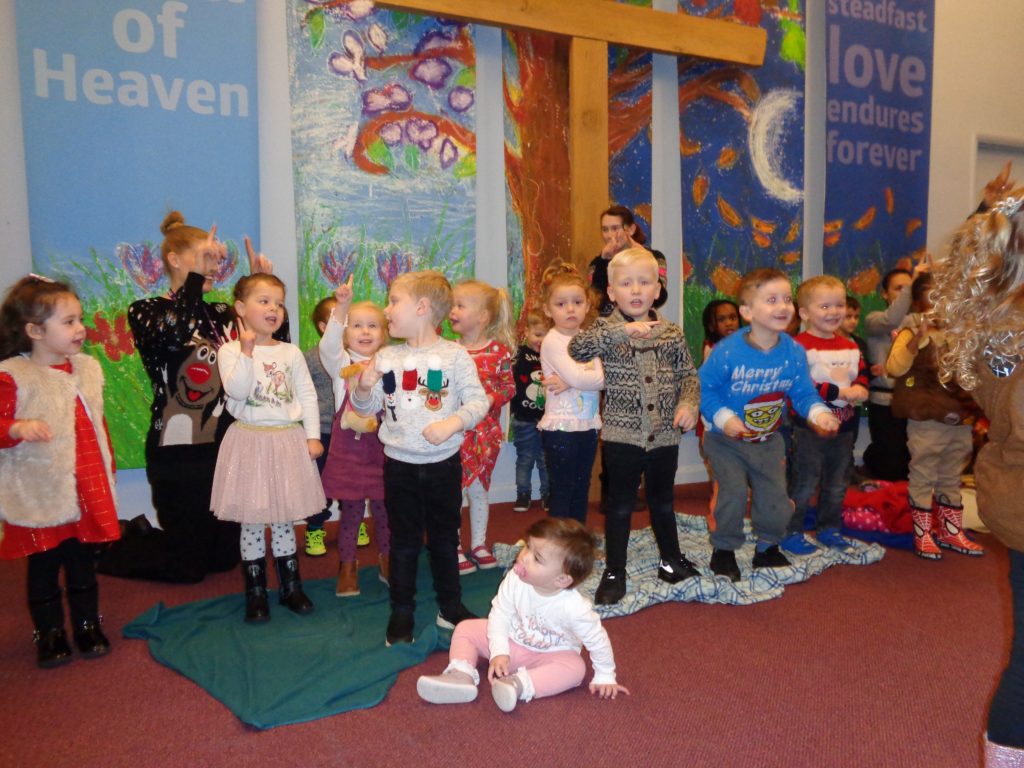 The children used Makaton to sign as they were singing

Nursery Manager Julie Miles said: “We decided to put our own unique twist on the traditional nativity play and it was a huge success. By filming the children prior to the party, it was much more enjoyable for them; they were excited to see themselves on screen and they were able to put their own interpretation on the story.

“Parents could see the children relaxed and having fun and they also had the opportunity to save the film to a USB stick to play it again at home. Everyone loved the film and our guests were very impressed with children’s Makaton signing skills.

“The games proved very popular too with family members all joining in. One Dad said he felt he had achieved one of his life goals. Not only did his son play the part of Joseph in the show but he and his son had won Musical Pairs, a game based on musical chairs but much more fun. He even has a certificate to prove it!

“It was such a lovely event and good old-fashioned family fun, which was really appreciated by all our families.”

Discovery Day Nursery falls within the Early Years and Childcare service, which is part of The Education People.

The Education People (TEP) is a company wholly owned by Kent County Council and was established to provide services and products to and on behalf of KCC. TEP supports the full age range from early years to young adults, offering a variety of services to help education professionals improve learning, wellbeing and children’s development. Providers can source training materials, resources and support via the company’s website (www.theeducationpeople.org). The product offer covers areas as diverse as school improvement to outdoor learning, safeguarding to school finance, supported employment to governor support, and equality and inclusion to early years and childcare.

Makaton training courses are available through TEP via the following link: https://www.theeducationpeople.org/products/early-years-childcare/individual-and-group-training-for-communication-and-language-in-the-early-years/