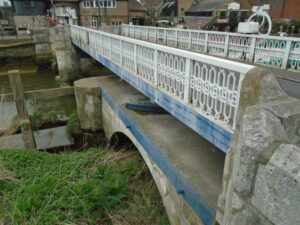 The works to repair the swing bridge will last seven weeks and are expected to begin on February 17.

The works and the closure of the bridge will not happen until the A256 is reopened.

The work by Southern Water is continuing on the A256 and KCC is continuing to keep the pressure on for them to get their work done and the road open as soon as possible.

The bridge deck will be removed and transported to a yard for the mechanical and electrical components to be replaced.

The opportunity will also be taken to clean and repaint the bridge deck.

Upgrades to the swing bridge operation on site will also be incorporated with the refurbishment works together with repairs to the road. 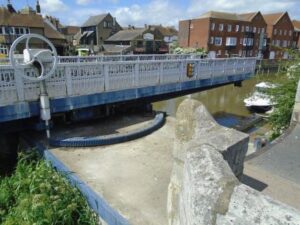 The road will be closed at the bridge with vehicles routed around a diversion.

Pedestrians will have a dedicated shuttle bus to transport them around to the other end of the bridge, operating daily from 6am until midnight.

River navigation will be maintained without restrictions once the bridge deck is removed but the bridge will be unable to swing open during the periods the bridge is being prepared for the initial lift and during final commissioning after the refurbished deck is lifted back on.

KCC Cabinet Member for Highways and Transport Michael Payne said: “Over the years the mechanical and electrical components that allow the bridge to operate have deteriorated and they have now reached the end of their serviceable life and need to be replaced.

“The refurbishment works will ensure that the bridge remains safe and operational for both road and river users for years to come.

“I appreciate that, until the works are completed, that residents and businesses nearby will experience some disruption.

“Unfortunately, this will be the case whenever the work is undertaken but Kent Highways will endeavour to ensure that this is kept it to a minimum.

“I also realise that work by Southern Water is continuing on the A256. These works and the closure of the bridge are not planned to run concurrently and we are keeping the pressure on for them to get their work done and the road open as soon as possible.”