The day has been designed to highlight the importance of all road users reflecting on their behaviour – whether cyclists, drivers or pedestrians.

It has been devised by the European Traffic Police Network (TISPOL). 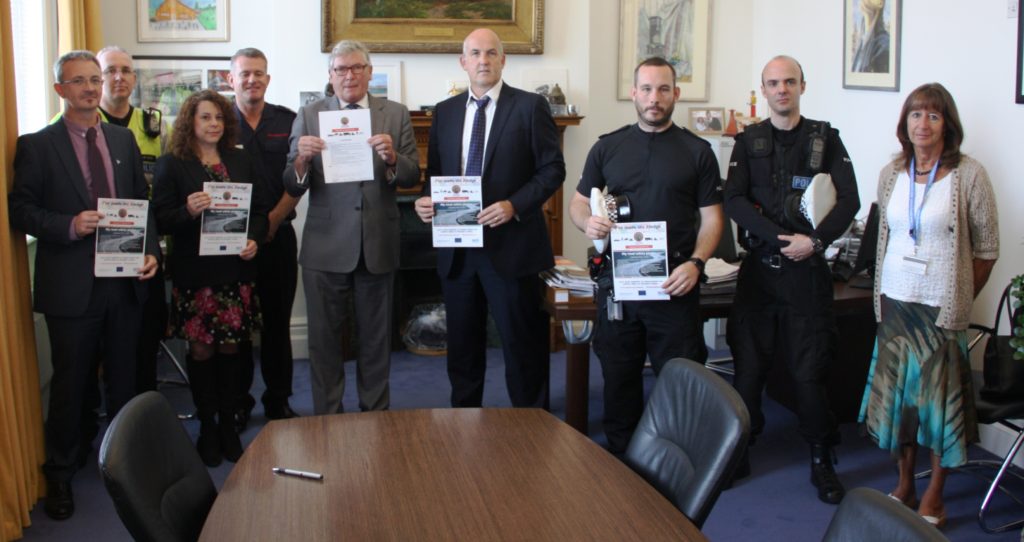 Kent County Council, Kent Police, Highways England, the Kent and Medway Safety Camera Partnership and Kent Fire and Rescue Service reaffirmed their pledge to road safety at an event at County Hall on the day.

KCC’s Road Safety Team Leader Vicky Watkins said: “The signing of this pledge isn’t just about having a day without a death on our roads, it’s about changing people’s behaviours.

“Drivers are unwittingly – and sometimes knowingly – putting other road users at risk. This could be by speeding, drink-driving, not wearing a seat belt, using their phone while driving or carrying out risky manoeuvres.

“This pledge isn’t just aimed at drivers. Cyclists and pedestrians increase their risk by choosing to ignore the rules or look for shortcuts, for instance by not using crossing points.

The number of people killed and seriously injured (KSI) on roads in Kent and Medway has gone down, according to the latest figures, but bad driving is the cause of a rise in serious crashes.

In 2015 707 people were killed and seriously injured (KSI) on all roads in Kent and Medway – including motorways and A roads managed by Highways England – compared to 715 in 2014.

Overall, 95% of all crashes include some element of poor road user behaviour in the cause.

The long-term KSI casualty trend for Kent remains downwards, falling 50% between 1994 and 2015.

The 12 month period saw a year-on-year reduction in casualties for road users including motorcyclists, cyclists, pedestrians, car occupants, under 16’s and those aged over 65.

Despite many years of decrease and the long term downward trend, the number of 17-24 year-olds killed or seriously injured as car occupants increased by 16% from 51 in 2014 to 59 in 2015.

This age group continues to be overrepresented in crash statistics – making up 23% of all car occupant KSI casualties in Kent in 2015.

Kent Police’s, Roads Policing Sergeant Steve Dunnett said: “Life lost on the roads is nothing more than a tragic waste and we are keen to do whatever we can to spread road safety messages.

“By reflecting on our driving standards and attitudes and modifying our behaviour, we can make a difference and prevent serious injury and death on the roads.

“Whilst people at home are pledging their support and raising awareness, myself and my team will be out as usual, on the roads of Kent where will be enforcing road traffic legislation.

“The team will be on the lookout for people driving dangerously, using phones at the wheel or speeding.

“We will continue to work with our partners to raise awareness of road safety and take action when people’s driving standards fall short.”

The pledge can be signed by anyone and TISPOL is encouraging everyone to do their bit to reduce risk and improve safety for the people who use our roads.

For more information and to sign up, visit www.tispol.org/edward

Day to highlight importance of safety for all road users was last modified: September 21st, 2016 by Ellis Stephenson