A fraudster who sold fake goods through Facebook and Gumtree has appeared in court.

Derek Mitchell, formerly of East Street, Sittingbourne, pleaded guilty to 10 charges of breaching the Trade Marks Act when he appeared before Medway Magistrates.

The court was told that KCC Trading Standards had begun an investigation after a tip-off that Mitchell was selling counterfeit items.

Officers discovered that in May last year, he had taken on a storage unit in Sittingbourne which he increased in size in August 2016. The facilities manager there was told that a large number of people had been visiting Mitchell’s unit on Saturdays to collect items, varying in size from small packages to large boxes. 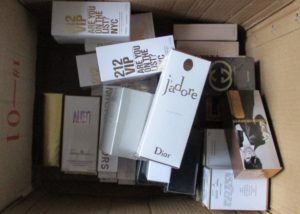 In late November 2016, Mitchell moved to new facilities in and around Sittingbourne telling the director he wanted a container for storing children’s presents and items from home in the run-up to Christmas. However, inquiries led to the discovery that he was advertising counterfeit items on a wholesale basis for sale through Facebook and Gumtree. On Facebook, when asked if the goods were “real”, his reply was “These are replica”.

Trading Standards officers conducted a test purchase of 19 bottles of “branded” fragrances for £190. A second test purchase was arranged for 2 December at the storage unit and 12 pairs of boots, branded as Adidas, were bought for £200 and various other items seized from the unit. All the items were confirmed as counterfeit.

The court was told that this had been a foolish endeavour by Mitchell, who was previously of good character. Magistrates imposed a curfew from 8.30pm to 8.30am, ordered him to wear an electronic tag, and ordered him to pay costs of £520. They also ordered the seized items to be forfeited and destroyed.

Steve Rock, the head of KCC Trading Standards, said: “This is a welcome result, and sends a clear message that selling fake goods will not go unpunished. Mr Mitchell was engaged in selling counterfeit goods, defrauding consumers, damaging and undermining legitimate local businesses, and putting the users of these products at risk.”