Members of Kent County Council (KCC) gathered at County Hall in Maidstone this morning to pay tribute to the life and reign of Her Majesty Queen Elizabeth II.

As part of the mourning period following the death of the Queen last Thursday, all formal meetings due to take place before or on the day of the state funeral have been postponed. Today, on what would have been the Full Council meeting, Members were invited to come together in the council chamber to mark the late sovereign’s exemplary service to the nation and reflect upon her legacy. 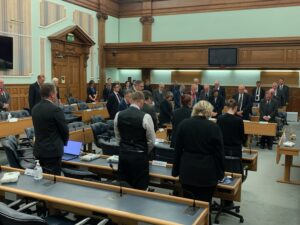 The Chair of KCC, Lesley Game, led the tributes, saying: “As the longest-serving monarch this country has known, Her late Majesty would have been assured a place in our history books but the grace, dignity and dedication with which she has served has made her place in history even more noteworthy.

“She was head of the nation, head of the Commonwealth, head of the armed forces and Supreme Governor of the Church of England. She was also a wife, a mother, a grandmother and great-grandmother, and while the nation mourns the loss of its monarch, we must remember that a family is mourning the loss of their loved one, and our most heartfelt sympathies go out to His Majesty the King and the other Members of the Royal Family at this most difficult of times.”

The Members then bowed their heads for a minute’s silence before the floor was opened for them to pay their own tributes to The Queen, talking about their personal recollections and memories of Her Majesty, with quotes chosen and shared from Tolkien, Larkin and Paddington Bear.

These tributes included further warm and colourful reminiscences from invited Honorary Aldermen and past Chairs of the County Council. A signing of the Book of Condolence in the Stone Hall and viewing of the floral tributes followed (for more information about how to leave a tribute, see here).

The Leader of KCC, Roger Gough, touched on Her Majesty’s times in the county: “The Queen was a great friend to Kent. She was here during many of the key events of her reign and the ones that actually define our life as a county. There was the opening of the aptly named QE2 Bridge, the opening of the Channel Tunnel, the opening of the Turner Contemporary, which was a remarkable event. And, not so long ago in November 2019, Her Majesty visited Royal British Legion Industries in Aylesford.

“She was a constant amidst change. A 70-year reign in which we saw the end of Empire, the arrival of the Windrush generation, social and cultural transformation in this country. And I am a great believer that if you are to achieve peaceful and progressive change, you need fixed points. Her Majesty was absolutely the figure that provided that. Always there, and always serving the country.

“God bless The Queen. God save The King.”

Dr Lauren Sullivan, Leader of the Labour Group at KCC, offered what she called some heartfelt words: “I think, like many, there has been a sense of a feeling of a drift, a sense of emptiness, and I suspect as it has done for many has brought back memories of our loved ones that we have lost and it is right to take that time, to take a moment to reflect on those feelings we have in our own lives and for the Queen and what her passing represents to us. She is a role model for so many people for her level of dedication and service.”

Antony Hook, Leader of the Liberal Democrat Group at KCC, reflected in his tribute: “I think it is Her Majesty’s immense personal qualities that made her someone almost everyone in the country could project onto. People imagined her, thought of her, as part of their own extended families, because at the end of the day, who wouldn’t want to have a person of her quality in their lives. During Covid, as all of us went many months without seeing our loved ones, her reassurance ‘we’ll meet again’ meant so much to people.”

Cllr Paul Stepto, on behalf of the Green and Independents Group of KCC, said: “I learnt from Radio 4 this week that when George VI was crowned following his brother’s abdication, the then Princess Elizabeth started praying every night for a baby brother because she did not want to be first in line for succession. I believe that her reputation as a kind wise and principled head of state was well deserved and shared throughout the world.”

The work of the council

All official business of the Council due to be discussed at the formal meeting that was postponed has been deferred to a Full Council meeting on 20 October 2022.

You can watch today’s council tribute meeting back here

If you are planning to attend Her Majesty The Queen’s Lying-in-State in London, all the information and guidance to consider (as well as a live queue tracker) so you can be well prepared can be found here

Services of commemoration have been organised at places of worship across Kent following the death of her Majesty the Queen, including in our county’s cathedrals where everyone is welcome on a first come, first served basis:

There will be a Requiem Eucharist attended by representatives from across the Diocese and the civic life of Kent, Medway, Bromley and Bexley.  The Rt Revd, Dr Jonathan Gibbs, Bishop of Rochester, will preside and preach.

The Service is not ticketed. Please arrive and be seated by no later than 3pm.

More information from the cathedral and its commemorations for Her Majesty The Queen here: https://www.rochestercathedral.org/

A special civic service is being held, which will also be live streamed via the cathedral’s website and YouTube channel.

Attendees should arrive in good time to be seated by not later than 10.40am

More information on how the cathedral is marking the passing of Her Majesty here: https://www.canterbury-cathedral.org/on-the-announcement-of-the-death-of-her-majesty-the-queen/

A service of commemoration for the county and borough in the Church of All Saints.

National Moment of Reflection on Sunday

The silence can be marked privately at home, with friends and family, out on doorsteps or the street with neighbours, or at locally arranged community events and vigils. Details of larger-scale public events to be held across the country will be published at: https://www.gov.uk/government/topical-events/her-majesty-queen-elizabeth-ii

Councillors pay tribute to ‘the extraordinary life’ of Her Majesty The Queen was last modified: September 15th, 2022 by Jo Godden