The Leader of Kent County Council says he hopes an immediate cash boost to help get the UK ready for Brexit on October 31 will resolve the outstanding issues facing hauliers and the export industry here in Kent.

Chancellor of the Exchequer, Sajid Javid, announced that an extra £2.1 billion is to be made available for no-deal Brexit preparation across the UK.

The move sees Brexit funding for this year double, with £1.1 billion being provided to departments and the devolved administrations immediately, and a further £1 billion made available, should it be needed.

This will ensure government departments step up vital operational preparations across the country as the UK leaves the EU on October 31.

Funding announced today will be used for border and customs operations, critical medical supplies, support for UK nationals abroad, and an awareness campaign to ensure the public and businesses are ready to leave the EU.

The Chancellor is setting aside £344 million to help get new border and customs operations ready. This includes: 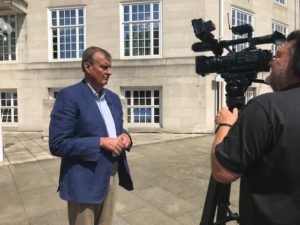 Welcoming the announcement Paul Carter said: “The extra funding for no-deal Brexit preparations is extremely welcome. We don’t yet know whether we are going to have an acrimonious or an amicable split from Europe, but we simply must be prepared for all eventualities.

“Our preparedness for the March 31 EU Exit was pretty good from a transport perspective – working with the DfT, Kent Police and other partners in preparing for delays at the ports of Folkestone and Dover.

“However, there were a number of significant unresolved issues back in March, and questions that were unanswered. These were mainly around how the customs clearance and paperwork system will operate and work in reality.

“There has been a common transit agreement between mainland Europe to try to enable the transport industry to get customs clearance online in advance. It is imperative that a system is designed that is going to work in as simple way as possible.

“We need to see various customs posts across the Highways England network, so that when the lorries arrive in Kent heading toward Dover and Folkestone, they have the necessary paperwork be able to board trains and board ferries.

“There needs to be absolute clarity as to where these inland checkpoints will be located and it is our strong recommendation that the majority of these need to be outside of Kent on the main route corridors – the M40, M1, M6, M11 etc – so that lorries have got the right paperwork before they get into Kent and then don’t have to rush around the county trying to get the right piece of paper in order to exit the country.

“We, and hauliers and exporters, need to urgently know how this system is going to work and then we need a full-on communications strategy that makes everyone aware of how it will operate. It needs to be as bureaucracy-free as possible so that it doesn’t exacerbate any delays in Kent.

“As Leader of Kent County Council I am here to scrutinise Government on how these systems will operate, acting as a critical friend to make sure that we have asked the awkward questions and have a sensible resolution of those issues in advance of October 31.

“It is quite clear that the whole of Cabinet is united on this and I very much welcome this additional money to resolve some of the outstanding issues in Kent around a no-deal Brexit.”