A fraudster who conned 18 victims out of nearly £40,000, mostly through shoddy workmanship, has been jailed for five years and one month following an investigation by KCC Trading Standards.

After earlier pleading guilty to 15 offences of fraud by false representation and two of running a company for fraudulent purposes, Raymond Sharpless failed to attend his sentencing at the end of 2017.  Following a press release in February 2018, he was arrested and brought to court.

Sharpless (pictured), formerly from New Romney, conned victims across Kent, Sussex and London, after advertising a variety of professional services, including plastering, roofing, groundworks and chair restoration and responding to jobs posted on trade websites. 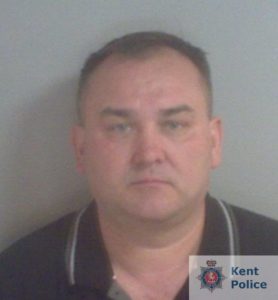 He visited unsuspecting victims and secured deposits on the promise of carrying out the agreed work. Sharpless would often fail to return to correct work of a very poor standard and in several cases he failed to hand back precious furniture he took from victims for restoration.

A building expert inspected work he had carried out for one household and decided it was “a complete waste of money” and “the work carried out has no value”.

Sharpless defrauded victims across the South East for 27 months, sometimes under his own name but he was also known as Mark Price, operating at least 11 different business names and three separate websites.

The investigation carried out by KCC Trading Standards began in September 2015 after Sussex Police raised concerns for a victim in their area.  A long investigation followed, revealing the full extent of offending.

Even after his arrest and questioning by officers in April 2016, Sharpless continued to offend with a further two victims coming forward to support the investigation.

Although some of the values of his frauds were low, the impact of the crime was often higher. One victim from the Herne Hill, London, area said: “He must have realised the value, monetary as well as sentimental, of the child’s chair I entrusted to his expertise.

“I had been looking forward to my granddaughter being old enough to use it, just as her brother had. Both pieces of furniture had been a part of my life for as long as I can remember. I miss them. I am also missing £805, the total I advanced to Mr Sharpless to meet his charges.”

Another, from the Ramsgate area, said: “My experience of using Ray Sharpless to get our roof fixed left me and my young family feeling very stressed and worried about being in our home.

“I was so upset when water was pouring in our house down two floors the next time it rained. It seemed like Ray had not done anything to fix the leak.

“I really wanted to leave Mr Sharpless a bad review so other people would to avoid him but I was genuinely worried that he might come back and do something to the house. Losing the money was bad enough but the stress and worry he caused by failing to do what we paid him made this whole situation a nightmare.”

In this case, each of his victims was in a vulnerable position, from the very circumstances in which they found themselves, needing his services.  Some were more vulnerable than others; he didn’t care who his victims were, three people were his neighbours. That did not matter to him, as long as he could pocket their cash and disappear.

The prosecution alleged that the defendant was a thoroughly dishonest individual. If he ever had any intention of running honest businesses, he soon forgot about it in order to pocket the money and run.

In sentencing, Judge James O’Mahony referred to Sharpless’ strategies of deceit including multiple company identities, invention of addresses and his lies regarding his van breaking down whilst leasing expensive vehicles and other excuses of illness, accidents or wrong equipment. The Judge commented on Sharpless’ breath-taking greed and bogus empathy for his victims in order to get his jobs.

The judge described Sharpless as “a conman of epic proportions” and said: “As for building work, floor laying, roof work, damp problems, plastering, renovation, electrics, you have as much skill an expertise as I have, which is nil.”

Sharpless was also given a criminal behaviour order which bans him from making false representations concerning property and furniture improvements and maintenance works.  He is also disqualified as a company director for 10 years.

Clive Phillips, Trading Standards Operations Manager for Complex Investigations said: “This was particularly wicked offending. Sharpless knew he would never complete on any of his contractual obligations – his sole intention was to dishonestly scam money from unsuspecting victims.

“This was evident in victim testimony which recount’s multiple trading names and a huge array of pathetic excuses for not returning to complete works.  “The effect on some of his victims has been profound, not just in terms of monetary loss, but in terms of trust, confidence and in some cases it has had a serious effect on his victims’ health.

“Even if you feel a tradesman is offering you a good deal and comes across as credible, we always advise residents to seek more than one quote for work they intend to have carried out.  For a list of businesses approved by KCC you can contact checkatrade.com online or call 0333 0146 190.”

“I am pleased to see that this person has pleaded guilty and been sentenced appropriately. I hope this sends a strong message that we will pursue such activity, bringing perpetrators to justice and making Kent a safer place to live”.