The sole boss of a concrete driveway company, who conned victims across Kent out of thousands of pounds, has been sentenced to more than three years in prison.

Arif Choudry, 54, from Tonbridge, was the director of Wycombe Welding Limited, previously trading as ADriveForLife.com.ltd, registered in Kings Hill. He had previously pleaded guilty to 19 offences of fraud by false representation and one offence of money laundering.

The prosecution, brought by Kent County Council’s Trading Standards Service at Maidstone Crown Court, presented evidence of fraudulent written and verbal representations made by Arif Choudry to 19 victims, who lost nearly £30,000 between them.

Described as a sophisticated and persistent fraud, carefully planned and professionally executed, Choudry induced his victims to enter contracts with the company by making claims that were completely false or created false impressions. 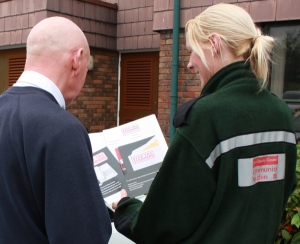 Trading Standards officers and KCC community wardens are keen to offer advice on how to avoid potential scammers and find reputable traders.

that that the company had completed major works at Chessington World of Adventures when it had not;

had been established for over 25 years, when it had in fact been incorporated in 2012;

that works would be guaranteed for 15 years when in fact most victims did not receive guarantees;

and that it was a family run business, when Arif Choudry was a one man band, who used a variety of aliases in correspondence with customers, giving the impression of a large company with multiple departments.

Some victims had been lured through misleading advertisements, including a radio advertisement aired regularly on Heart FM.  Victims were then issued with misleading paperwork which included false cancellation rights and giving the impression that the business had a grand head office when in fact it was none other than a virtual office run by Regus in Kings Hill.

ADriveForLife.com ltd was set up in the name of Choudry’s wife to stay hidden from public view.  When dealing with customers Choudry used the names:  Al, Samantha Middleton, Sharon Hayes, Kay Hayes, Tom and Mr P Mutah.  None of the 19 victims knew his real name.

When Choudry’s victims, many of whom were elderly or vulnerable, finally realised that they had been lied to and tried to complain, they were browbeaten, abused, threatened with court action by a fictitious legal department, or ignored.

As well as having the phone put down on them victims recalled being shouted at, called thick, told, “I speak you listen” and yet another was asked, “do you ever stop talking?”.

One victim’s statement summarised the effects of Choudry’s impact on their lives: “My wife and I were emotionally drained during the time we had dealings with ADFL and the mental trauma lingers on every time we step onto the garden.

“The unfair, rude and unimaginable verbal abuse that we were put through cannot be put into words. Every time I heard the ADFL advertisement on Heart FM radio, even until recently, it sent ‘chills up our spines’ due to the trauma caused.”

With regard to the money-laundering charge, the court heard how Choudry had moved the proceeds of his business between 16 accounts before being withdrawing it in cash.

The court also heard that in January 2013 Arif Choudry had been made bankrupt by HMRC in relation to his handling of a former business, Mansion Driveways, which had also been prosecuted by Kent Trading Standards in 2013.

Choudry’s defence barrister Michael Haynes said that Choudry’s business was installing at least two or three driveways a week and the complaints represented only a small proportion of his business and that Choudry had “experienced problems in managing the Company properly”.

In sentencing, Judge Charles Macdonald QC said Choudry’s advertising was “packed with lies” and although the overall loss was not high, to each victim it represented a significant loss.  The judge accepted that ADriveForLife.com ltd had not been set up for the purposes of committing fraud but that it was used as an “apparatus of deceit”.

Before sentencing Choudry to an immediate 38 months imprisonment the judge said Choudry had tricked his customers into dealing with what would end up being an “aggressive and overbearing bully”. He was also banned from being a company director for four years.

Choudry had benefited £29,591 from his crimes and the court agreed, at a previous hearing, an order under the Proceeds of Crime Act. Should KCC identify assets or wealth in the future, it can apply to the court for them to be forfeited.

Mike Hill, KCC’s Cabinet Member for Community and Regulatory Services, said: “This is an excellent result for Kent and its residents. I hope the persistence and determination of Kent Trading Standards to root out such individuals will provide reassurance to legitimate business and residents alike and send a clear message that we will take appropriate and proportionate action against those that operate outside of the law.”

Clive Phillips, Operations Manager of Complex Investigations for Trading Standards said: “Based on the advertisements of the company, masterminded by Arif Choudry, its customers could be forgiven in thinking that they were dealing with a large, well organised and reputable company, when in fact the claims were false, and its customer service was appalling.

“Due to the high numbers of complaints received and listening to how Choudry treated his victims we had no other choice but to take this action. The pure fact that Choudry made no efforts to change his trading practices, despite multiple complaints, suggested to this authority that his actions were criminal.

“We always recommend researching who you instruct to carryout work, obtain at least three quotes and if you have any doubts don’t agree to the work.”

Residents who have been defrauded like this can contact the Citizens Advice Consumer Service on 03454 04 05 06 for free advice.  Kent residents looking for vetted and reputable traders can search online at www.checkatrade.com online or call 0333 0146 190.