A Community Alcohol Partnership (CAP) has been launched in Herne Bay to help tackle underage drinking and anti-social behaviour in the area.

The move comes after concerns about alcohol-related anti-social behaviour in the area and test visits by Trading Standards to 24 off licences in Herne Bay, which found that 33% sold alcohol to a volunteer without asking for ID. 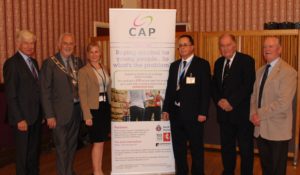 CAPs are made up of partnerships between local authorities, police, schools, retailers, neighbourhood groups and health providers, working together to empower communities to tackle alcohol-related harm to young people and improve the quality of life for residents.

They aim to reduce the sale of alcohol to young people, advise them on the dangers of drinking and provide alcohol-free activities through youth services and local charities.

The Herne Bay CAP is led by Neil Butcher of KCC Trading Standards, who last year won the Community Alcohol Partnerships Award for Outstanding Contribution after launching new CAPs in Ramsgate and Broadstairs, signing up businesses and schools and bringing together a wide range of partners to tackle underage drinking and associated anti-social behaviour in Kent.

The new CAP will work with retailers to offer guidance and training to combat underage sales of alcohol and proxy purchase, where adults buy alcohol on behalf of young people. It will also work with schools and youth services to engage with young people.

Neil Butcher said: “There is growing concern among local residents, councillors and retailers about the levels of underage drinking in Herne Bay, so I am delighted to announce the introduction of the CAP to tackle alcohol-related harm in the area.”

He outlined the process in the town, which began with visits to all 24 off licences, when the introduction of a CAP and the “Challenge 25” process were explained. More recently, Trading Standards sent a young volunteer to the same premises, and in eight of them, ID was not requested.

No law had been broken because the volunteer was, in fact, 19, but the off licence was still required to ask for ID. Mr Butcher said this was a “disappointing” result, although all the premises involved had since agreed to tighten up their procedures. 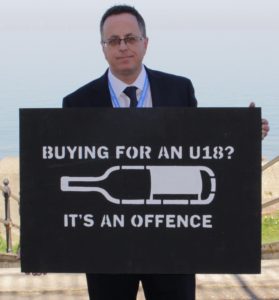 Mr Butcher also showed a temporary stencil, warning adults no to buy alcohol for under-age drinkers, which will be painted outside all the off licences around certain events, such as Bank Holidays and the World Cup this summer, when more alcohol is likely to be consumed.

Mike Hill, KCC’s Cabinet member for Community and Regulatory Services, said: “Kent County Council has always been an advocate of CAPs and in fact launched the first three CAPs following the first ever pilot in St Neots, Cambridge in 2009.

“CAPs place a high value on working with young people and it is good to see Herne Bay High School and East Kent College are already participating. We believe we can add great value to the alcohol education programme in both schools and we will also be working closely with youth groups, local retailers, the community and other partners to ensure that we all work together to reduce levels of underage drinking across Herne Bay.

“We are proud to work alongside the Herne Bay CAP and are committed to supporting its ongoing development.”

Sir Roger Gale MP said: “I am delighted to see the launch of a Community Alcohol Partnership in the town.

“Drinking alcohol brings serious risks to children, putting them in danger of physical and social harm. They are far more likely to injure themselves or someone else, fail to reach their potential at school or engage in anti-social behaviour, which can blight local communities and cause real concern to residents.

“I very much welcome CAP’s joined-up, partnership approach to addressing this issue and creating better, safer and friendlier neighbourhoods.”

CAPs across the UK have enjoyed considerable success tackling underage drinking with a mix of education, enforcement, community engagement and the provision of diversionary activities for young people.

CAP Director Kate Winstanley said: “‘I am delighted at the launch of a CAP in Herne Bay. Community Alcohol Partnerships are a tried and tested way of driving down underage drinking and creating better, safer and friendlier neighbourhoods.”

Community Alcohol Partnerships (CAP) schemes are set up to tackle underage drinking and the resulting harm to local communities. All schemes are managed and delivered locally via partnerships between local authorities, police, retailers, schools and neighbourhood groups and health providers, offering a flexible model tailored to fit the needs of each community. All schemes incorporate a mixture of education, enforcement, community engagement and the provision of diversionary activities for young people. For more information, see the website www.communityalcoholpartnerships.co.uk