Children and their families were recognised for their artworks having come together to create their own pieces after school.

The collection of different arts – from fabrics, to sculptures, to paintings – were created by about 50 children who attend Archbishop Courtenay, Maidstone, Furley Park, Ashford, Eastborough, Maidstone, Willesborough, Ashford, and Newlands, Ramsgate, primary schools.

The children and their families, who took part in the Arts Award’s ‘Discover’ course accredited by Trinity College London, were presented with certificates for their accomplishments at Oakwood House, Maidstone on Wednesday, 3 December. 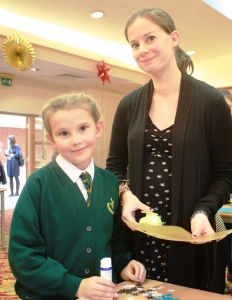 Among them were Maria Rumley and her daughter Tierney, nine, who attended the five week course at Willesborough Junior School in Highfield Road, Ashford.

Mrs Rumley said: “We were invited to go on the course with our children and it was an opportunity to do something for a couple of hours each week.

“We made Sellotape sculptures, we went out to the Stour Valley and did some painting, and we were learning about art as well as doing it in a different way.”

He said: “First of all, my arm was wrapped in Sellotape and it went right around my arm and my hands and then when it came out it was a sculpture.

“I can’t really say what was the best bit because it was all really good and I’d recommend other people do it.”

Archbishop Courtenay Masha Novikova, eight, and her mum Galina, from Maidstone, both took part in the activities at the Eccleston Road school.

Masha said: “I enjoyed making clay model of a dragon and I liked making the puppets but I really did like making a skirt and a shirt which I wore to the seaside. 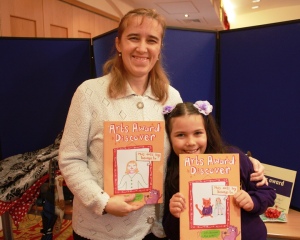 Mum Galina said: “I quite enjoyed it – I didn’t expect much from it at the beginning, but we both enjoyed it and it was interesting and something fun to do together.”

Arts Award’s Discover is an introductory award open to children and young people aged up to 25.

To achieve Discover, children uncover the arts around them, find out about artists and their work and then produce their own pieces. 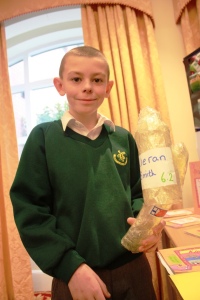 Children and their families awarded for artwork was last modified: December 4th, 2014 by Thom Morris