KCC’s outgoing Chairman David Brazier was delighted to be able to hand over a cheque for £2,000 to Josephine McCartney, Chief Executive of The Kent Community Foundation, which was Mr Brazier’s chosen charity for his year in office. 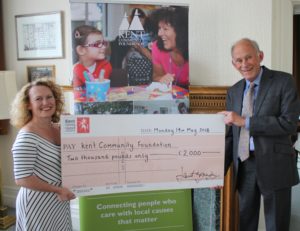 One of David Brazier’s last acts as KCC Chairman was to hand over a cheque for £2,000 to Josephine McCartney representing his chosen charity, the Kent Community Foundation.

The money was raised through the Good Friday Sportive, which started at finished at Cyclopark in Gravesend and attracted about 250 keen cyclists.

Mr Brazier, himself a keen cyclist, was keen to take part in the Sportive but was suffering from flu. He was, however, able to be on hand to wave off the first group of riders.

“Considering the weather, I was delighted with the turn-out for the Sportive and with the fact that it raised £2,000 for the charity, which connects people who care with local causes that matter,” he said.

After a warm-up lap of the Cyclopark circuit, the elite cyclists headed out into the quiet lanes of the surrounding Kent countryside for 55 miles of testing climbs, fast flats and exhilarating descents.

Now in its third year, the Good Friday Sportive is the first in a series of annual events organised by Cyclopark, Kent’s premier cycling facility.

It was the first time the event has hosted a family route, having riders of all ages taking part across the 15 miles. More experienced riders took on a 59.5 mile challenge.

For more information on Kent’s premier cycling facility go to: https://www.cyclopark.com/ or for ideas on how you can be #everydayactive: https://www.kentsport.org/get-active/

Chairman’s cycling event raises £2,000 for his chosen charity was last modified: May 18th, 2018 by Murray Evans