Kent County Council today unveils its budget plans for 2020-21 which aim to prioritise the services that improve the quality of life for the people of Kent.

The budget plans show that, for the first time in many years, the government has given the council an increase in its funding of £28.6 million and the council has invested this to meet the cost of rising demands and its key priorities. The council will be spending an average of £663 per person this coming year, an increase of £38 per person.

The government’s figures assume the council will increase council tax by 2% for adult social care services and 2% for all the other services the council provides. This means that the average household in Kent will pay 89p a week more than last year.

The council will be spending over £1 billion on essential day to day services – this is an increase of £68 million (7%) and covers services such as care for the elderly and vulnerable adults, free and subsidised transport for children to get to school, recycling and disposal of household waste; and investment in new or improved public infrastructure including schools, roads, libraries and children’s centres.

The budget proposals will be considered at the full county council meeting on 13th February.

KCC Leader Roger Gough said the extra funding from the government– the first rise in government funding for 10 years – means the council can press ahead with investing in the priorities as outlined in its five-year Strategic Statement; a public consultation on which is also launched today.

“We congratulate the government on recognising the importance of the services provided by local councils and being in a position to fund them more appropriately next year.

“It is important that KCC continues to spend public money wisely and keep council tax increases manageable, finding the right balance of funding from government and council taxpayers and continuing to make efficiency savings to fund necessary spending increases.

“The extra government funds are very welcome and much needed, but we also need to remember that they are only allocated for the coming year, so councils like ours need to continue to push for better funding in the future, which we hope will be outlined in the government’s Fair Funding Review.

“County council services have a major impact on people’s lives, through schools, roads and highways, social services for vulnerable children and adults and for elderly people and services that are important to families and their communities, such as libraries and country parks.

“As Leader of KCC I want to focus on the spending priorities and services we provide that matter most to our residents and make the most visible difference, whilst still achieving value for money for the Kent taxpayer.

“That’s why it’s really important to me that as many people as possible take part in this consultation to help us to shape what those services will be like and what kind of county we want to be living in over the next few years.” 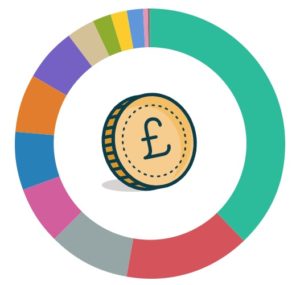 Whilst the increased spending largely covers the impact of greater demand for council services (particularly social care) and increases in costs, it also focuses on priority areas such as support for children and young people with special educational needs and disability, roads and highways maintenance, waste and environmental services, and other high-impact priorities set out in the council’s new five-year Strategic Statement.

Around half of the increased spending, £34m, will come from savings and income most of which are from existing rather than new plans.

At this stage there is a small shortfall of just under £2m to balance our £1 billion budget plans, which will be met from a combination of changes in the final spending/savings plans.

The council also has a capital budget to invest in our infrastructure and to maintain or improve our assets. Our capital proposals include £906m investment over the next three financial years. This includes investment in priority areas such as roads and highways, waste services and improving the buildings our services are based in.

Peter Oakford, Deputy Leader and Cabinet Member for Finance, Corporate and Traded Services added: “It is important that Kent residents and businesses understand that the council has still got to make some tough decisions, on both spending on day-to-day services and improvements in public infrastructure.

“The 2020-21 proposals represent a significant shift from the very challenging budgets we have had for a number of years where money has been very tight, to a year of treading water with some additional money while we await the outcome of a Government Spending Review sometime later this year which should provide a clearer picture of the financial outlook for local government over the next few years”.

The 2% rise in general council tax will help fund services including:

This plan provided a much larger increase than the £1.3bn increase in 2019-20, and on the years before that which had significant reductions in government funding and overall spending on local authority services.

The government’s proposals also include increased spending on schools over the next three years amounting to £7.1bn by 2022-23 with an increase of £2.6bn for 2020-21.  This increase will see per pupil funding rise next year by at least 1.8% after several years where it has been capped at the same amount per pupil in cash terms, with a new minimum amount per pupil of £3,750 for primary schools and £5,000 for secondary schools.

Budget plans focus on a better life for people in Kent was last modified: January 6th, 2020 by Justine Wingate