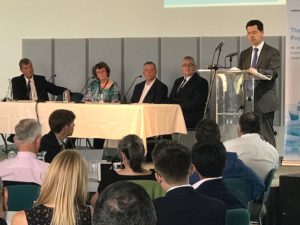 He also expressed support for the Thames Estuary Production Corridor, an industrial vision, launched by the Greater London Authority (GLA) and South East Local Enterprise Partnership in 2017, to develop a world-class hub for cultural and creative production along the Estuary.

Communities Secretary Rt Hon James Brokenshire MP said:  “I’m excited by the bold and ambitious vision for the future of the Thames Estuary that’s been set out – as well as the clear-headed steps proposed to get us there.

“I’ve been really pleased to see the scale of ambition from partners in the Thames Estuary Production Corridor – helping the area become a world-class centre for production with a focus on the creative and cultural industries.”

“Government has said the case for investment and collaborative working in the Thames Estuary is clear. The potential here is greater than the Northern Powerhouse.

“We must now capitalise on that commitment and shape the type of growth we want to see – ‘good growth’ that isn’t focused just on housing.

“We want to see enhanced transport links with Crossrail to Ebbsfleet, inward investment, both public and private, devolving governance to put decision-making in local hands, and welcoming the creative industries and healthcare sectors to the Thames Estuary.

“We have been working closely with Government and local partners to shape governance, define appropriate development and build on our strengths to deliver balanced and good growth in the Thames Estuary.”

Chair of the South East Local Enterprise Partnership, Christian Brodie, said: “We will continue to position the Thames Estuary as one of our top priorities for growth and we identify the Production Corridor as a key part of this.

“The vision is shared not just by SELEP and the Mayor of London, but by the 20 county, unitary, borough and district authorities on both sides of the estuary.

“The Digital and Creative industries are vibrant in the South East and we will work together to support their continued growth through our Local Industrial Strategy. It will require continued collaboration and commitment from everybody to ensure that the Thames Estuary Production Corridor becomes the nationally significant project we believe it to be.”

Councillor Teresa O’Neill, Leader of the London Borough of Bexley said: “We are all doing everything we can to ensure that growth along the Thames Estuary delivers for future generations. Completing Crossrail to Ebbsfleet as originally planned is essential for this to happen.”

In his speech, the Communities Secretary also announced the publication of new guidance on New Town Development Corporations which will set out greater clarity for stakeholders on compulsory purchase powers.

Generating growth in the Thames Estuary – July 2019 from Kent County Council on Vimeo.