Breaking the News, a free exhibition which looks at how the news has shaped the world we live in for centuries and how it plays a vital role in all our lives today, begins a tour of Kent libraries next Thursday, 24 February.

The exhibition runs at the Kent History and Library Centre, in Maidstone, until 2 April, and will visit several other county libraries in the spring and summer. 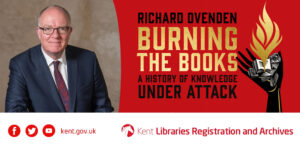 Breaking the News is brought to Kent Libraries by the British Library Living Knowledge Network. It is inspired by an exhibition at the British Library, which houses the UK’s biggest news collection dating back to the 1500s. It examines whether the news can ever be objective, as well as the threat posed by fake news. It showcases what makes a story through real headlines from newspapers, TV, radio and digital media.

Among the news events covered in the displays are: The Great Fire of London, the first moon landing, Brexit, the English Civil War, the influence of Greta Thunberg and the trial of Oscar Wilde.

The display covering the topic “Can we trust the news?” includes these examples: 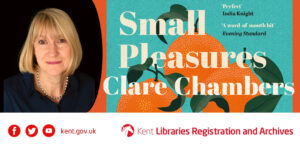 Clare Chambers will be the guest speaker on 24 March

The filming of Michael Buerk’s report of the 1984 Ethiopian famine which brought international attention to the crisis;

The Popish Plot of 1678 (widely believed at the time, alleging that Jesuits were planning the assassination of King Charles II in order to bring his Roman Catholic brother, the Duke of York, afterward King James II, to the throne);

The four-year-old boy with suspected pneumonia who was forced to sleep on a hospital treatment room floor because of a lack of beds; and

Mary Toft, who tricked doctors into believing that she had given birth to rabbits in 1726.

Mike Hill, KCC’s Cabinet Member for Community and Regulatory Services, said: “This exhibition focuses on a topic which does not obtain a great deal of coverage because it is not just about historical events but how they were reported at the time.

“I am delighted that Kent has been chosen as one of the local authorities which the British Library has included in the project.

“I hope as many Kent residents as possible take the opportunity to visit the exhibition at one of our libraries where it will be displayed, and perhaps attend the two interesting free events at the Kent History and Library Centre.”

The exhibition will also feature items from Kent’s own Archive collection.

Kent residents can join the national launch of the exhibition virtually. It is taking place on Thursday 24 February from Leeds Central Library at 7pm. http://living-knowledge-network.co.uk/library/introducing-breaking-the-news .

There will also be two free in-person events at the Kent History and Library Centre.

Small pleasures – author talk by Clare Chambers. Thursday 24 March, 6.30-7.30pm. Clare will be talking about her novel Small pleasures which was longlisted for the Women’s Prize for Fiction 2021 and was featured on BBC Radio 4. The novel is inspired by historic events and the local newspapers of the day.

For more information and to book for events see https://bit.ly/BreakingTheNewsKent