As Kent’s “Release the Pressure” campaign marks its first anniversary, £150,000 of new funding has been announced to bolster initiatives to reduce the number of suicides in the county and to diminish the stigma of mental health.

The highly visual awareness campaign, which aims to reduce the number of suicides by encouraging men feeling under pressure to seek help, was launched last year after figures revealed suicide is the leading killer of men under 45.

In Kent, in 2016, there was a decrease in the numbers of people taking their own lives with 140 registered suicides.

Of these, 104 (74%) were men which shows a slight fall from 116 male suicides the previous year but the rate of suicide in the county is still higher than the national average.* 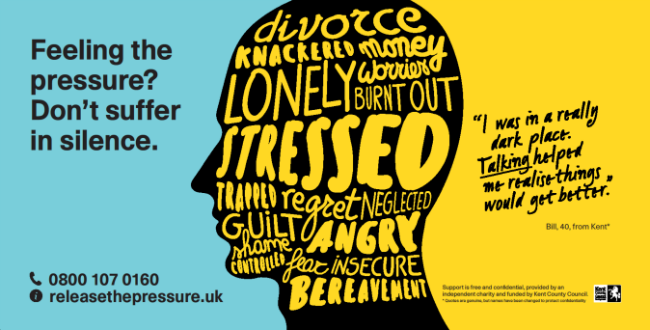 During the first year of the campaign there has been a 76 per cent increase in the number of male callers to a special helpline and now Kent County Council has been awarded £100,000 from the mental health programme at Health Education England, KSS, to be spent delivering suicide prevention training to organisations and voluntary sector groups to improve the support available for people when they are going through rough patches in their lives.

KCC Director of Public Health, Andrew Scott-Clark said: “We welcome this reduction in the number of male suicides, and we hope that our Release the Pressure campaign is helping to contribute to a culture where it is easier for men to speak about their problems in their lives.

“However every death from suicide is a tragedy, and we will continue to ensure that we do as much as we can to support everyone, male and female, when they going through tough times. We invite organisations across Kent to contact us about this new suicide prevention training – just one conversation between work colleagues, friends or team mates could help to save a life.”

Kent and Medway NHS and Social Care Partnership Trust has also received £50,000 of funding from Health Education England, KSS to enhance the suicide prevention training provided to mental health professionals. Both organisations will work together to ensure that their training programmes are complementary.

Rosarii Harte, Deputy Medical Director, KMPT commented: “Whilst there is a lot of work taking place in Kent to increase mental health awareness and to prevent suicide there is still a lot more we can do. The funding we have received from Health Education England will allow us the opportunity to work together to help people speak about their problems and to help them when they do.”

Cavita Chapman from Health Education England added: “We are pleased to provide this funding to Kent. By reducing stigma and improving people’s skills and confidence to talk about the problems and stresses that other people are going through, we hope to prevent some of these tragic deaths.”

If you would like to register your interest in attending the free training which will be delivered later in the year, please email phworkforcedevelopment@kent.gov.uk

The “Release the Pressure” campaign was developed after research with focus groups explored the pressures that men are under and in-depth interviews with individual men who shared their experiences and feelings that led them to contemplate suicide.

The campaign urges people to seek help by calling Freephone 0800 107 0160 where support is available from trained and experienced staff 24 hours a day 365 days a year. The campaign website www.releasethepressure.uk also includes case studies from men in Kent who have turned their lives around after attempting suicide.

In the past year, a number of individuals have provided feedback to the campaign organisers on the benefits of talking saying: “If I hadn’t opened up, I wouldn’t be here today,” and “Talk to anybody who will listen, it can only help even if it takes some time to realise that.”

Support is free and confidential, provided by an independent charity Mental Health Matters and funded by Kent County Council. In the past 12 months, 6577 men have called the helpline.

The number of male callers has grown by 76 per cent during the campaign, to a monthly average of 548. The number of women calling the helpline was 12,668 over the past year, an increase of 23 per cent.

Alan Heyes from Mental Health Matters said: “Not everyone has friends or family that they can open up to, but we know that talking about issues can be a great way to start to feel better. Speaking to someone in our team who isn’t going to judge you, can help you start getting your life back on track.”