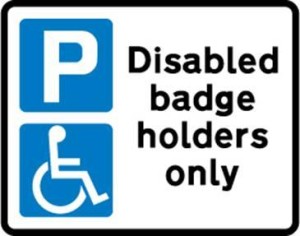 A blue badge enforcement day has been held to crack down on incorrect and fraudulent use of the disability scheme.

Throughout the day, 41 drivers were spoken to with the vast majority, 37, using the blue badge correctly.

Four expired badges were also taken out of circulation.

Kent County Council’s Cabinet Member for Adult Social Care and Public Health Graham Gibbens said: “These checks are as much about awareness as they are enforcement

“The response from the public was positive with people welcoming the checks.

“We want to ensure people are using the scheme correctly and we will clamp down on anyone trying to cheat the system.”

Using someone else’s blue badge or allowing another person to use it can land you with a fine of up to £1,000 on conviction.

The forging or counterfeiting a blue badge attracts a fine of up to £5,000, or if convicted under the Fraud Act, is likely to attract a community order or custodial sentence of up to a year.

The refusal to allow an authorised officer to inspect a badge is also an offence and attracts a fine of up to £1,000 on conviction.

Of those issued, five badges were confiscated for misuse and two cautions were issued to people using the badges illegally.

Further enforcement days will be held in the county over the next few months.

To report misuse of a blue badge, visit www.kent.gov.uk or email bluebadgeteam@kent.gov.uk