Op Assist, the multi-agency crackdown on fly-tipping across the county has been recording a number of successes.

Over the past few months, officers from local authorities, have been working together with the police and other agencies,  carrying out days of action to deter illegal dumping and identify unlicensed waste collectors. 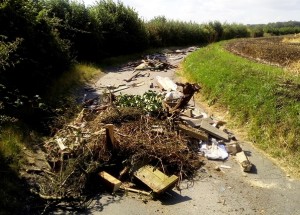 A typical example of the aftermath of flytipping

Kent County Council is investing £250,000 to tackle fly-tipping with more electronic surveillance and covert cameras and tracking to better target criminal activity. It also supports the district councils and police, who are the prosecuting authorities in most cases, and enables Op Assist to be doubled in frequency.

“If you hire an unlicensed waste carrier, you cannot guarantee where your rubbish will end up. If it gets dumped and traced back to you, the waste is still your responsibility and you can be prosecuted,” he said.

Householders or small businesses found to be using criminals to dispose of their waste can and are being prosecuted by local authorities in Kent with fixed penalty notices that be up to £400 per offence.

Mr Whiting said: “I would like to congratulate our partners in the district and borough councils and the Police and on their efforts in tackling this crime.

“More than 90% of fly-tipped waste in the county could have been disposed of for free at one of the 18 KCC household waste recycling centres (HWRC) in Kent or from a kerbside collection by their local district or borough council.

“Fly tipping by unscrupulous criminals is an anti-social crime which blights our countryside and neighbourhoods.”

A vehicle and trailer involved in two large-scale fly tips of soil were seized by police and borough council enforcement officers in Maidstone;

Police investigated a report of a skip lorry believed to be using false number plates and being associated with someone known to engage in fly-tipping offences. The vehicle, which had been seen around the Queenborough and Rushenden area on Sheppey, was located and, after confirmation of the false number plates, was seized as having been used in crime;

The driver of a Ford Transit carrying scrap metal in Strood could not produce a scrap metal licence or waste carrier’s licence. The vehicle’s identity was checked and as the chassis stamp number did not match rest of the registered information, the vehicle was therefore seized;

A Mercedes skip lorry was seized in Rainham on suspicion of carrying waste illegally. The owner claimed the vehicle did not run and had not been on the road. However, intelligence showed the vehicle in use two days previously, carrying a skip. The trade plates were registered to a company that ceased trading several years ago, and these were seized and returned to the DVLA. After initially claiming the vehicle keys were not at the location, they were handed over to allow the vehicle to be removed.