The award is the international quality mark, awarded by the environmental charity Keep Britain Tidy, for parks and green spaces 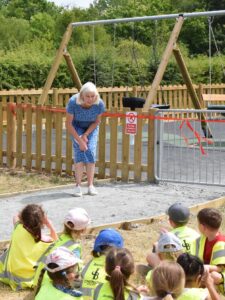 Over the past to years, parks have played a vital role for people through lockdowns as a place to relax, exercise and meet friends and family safely.

Kate Phillips, Head of Country Parks for KCC said: “We are absolutely delighted to retain all eight Green Flag Awards. The team have excelled in maintaining the parks and looking after our volunteers and visitors”

Mike Hill, KCC Cabinet Member for Community and Regulatory Services, KCC said: “We know how important quality green spaces are for the environment and the health of our communities. Our country parks play a vital role and are valued greatly by residents and visitors to Kent.

“These awards celebrate the dedication that goes into maintaining them to such a high standard and I am delighted we have maintained our eight Green Flag Awards.”

Keep Britain Tidy’s Accreditation Manager Paul Todd said: “I would like to congratulate everyone involved in making their parks worthy of a Green Flag Award.

“Shorne Woods, Teston Bridge, Manor Park, Lullingstone and Brockhill Country Park are vital green spaces for the communities of Kent. This award is testament to all the hard work of staff and volunteers, who do so much to ensure that it maintains the high standards demanded by the Green Flag Award.”

The Green Flag Award scheme, managed by environmental charity Keep Britain Tidy under licence from the Department for Levelling Up, Housing and Communities, recognises and rewards well-managed parks and green spaces, setting the benchmark standard for the management of green spaces across the United Kingdom and around the world. 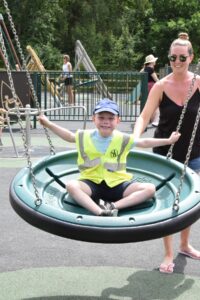 Trying out the new play equipment

Meanwhile, new and improved play areas are being provided across most of KCC’s country parks, thanks to the investment of £1.1million of Public Health Covid-19 recovery funding.

Supplementing the existing play spaces already at the available, the play area – designed and installed by contractors Playdale – includes several carefully considered inclusive elements such as an ability swing, easy access ramps and an in-ground inclusive roundabout suitable for wheelchairs.

There are also low level games and plenty of imaginative play with a play ship and train, as well as two new climbing structures, among many other features.

The Green Flag Award Scheme is run by Keep Britain Tidy, under licence from the Department for Levelling Up, Housing and Communities, in partnership with Keep Scotland Beautiful, Keep Wales Tidy and Keep Northern Ireland Beautiful.

Keep Britain Tidy sets the standard for the management of parks and beaches, inspires people to be litter-free, to waste less and live more sustainably. It runs campaigns and programmes including the Great British Spring Clean, Eco-Schools, Love Parks, Eco-Schools, the Green Flag Award for parks and green spaces and the Blue Flag/ Seaside Awards for beaches. To find out more about Keep Britain Tidy, its campaigns and programmes visit www.keepbritaintidy.org.

Any green space that is freely accessible to the public is eligible to enter for a Green Flag Award.  Awards are given on an annual basis and winners must apply each year to renew their Green Flag Award status.  A Green Flag Community Award recognises quality sites managed by voluntary and community groups. Green Heritage Site Accreditation is judged on the treatment of the site’s historic features and the standard of conservation.