Plans for a relief road of the A28 through Birchington, Acol and Westgate-on-Sea have received backing from the government and will now move on to the next stage of development.

A bid to fund the £49.8 million project was submitted following a request from the government in December for regions to agree their priorities for improving the Major Road Network – the country’s busiest and most economically important local authority A roads. 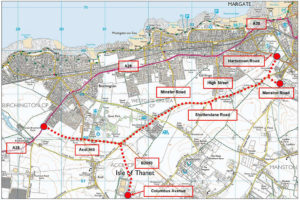 The proposed new bypass route shown with the dotted line

The A28 relief road would provide an alternative route, utilising the existing Shottendane Road which runs south of and parallel to the A28. This would be widened and improved.

The new road would link to the A28 south of Birchington and to Manston Road and Hartsdown Road, east of Westgate-on-Sea, through future development sites. It would also provide a southern link through an extension to the existing Columbus Avenue, providing traffic relief to the village of Acol.

The A28 scheme was previously agreed by Transport for the South East, a new sub-national transport body which brings together local authorities, local enterprise partnerships and the transport industry.

The government announcement can be viewed here https://www.gov.uk/government/news/18-new-roads-move-a-step-closer-to-completion

KCC’s Cabinet Member for Highways Mike Whiting (pictured) said: “This is a very important project for East Kent and the Chancellor’s announcement about the A28 scheme gives us confidence to progress it to the next stage.

“The schemes we have put forward through our work with Transport for the South East will make a big difference to the lives of our residents.

“If funded we can look forward to more reliable, quicker journeys and help cut congestion whilst supporting new housing, businesses and much needed jobs in the area.”

Cllr Keith Glazier, chair of Transport for the South East, said: “The Chancellor’s announcement is good news for people and businesses in East Kent.

“The A28 Relief Road scheme is one of Transport for the South East’s top ten priorities for the region’s Major Road Network, which were submitted for funding in the summer. If delivered, it would mean better and more reliable journeys for road users and help reduce congestion, speed up journey times and support new housing and jobs.

“By speaking with one voice to influence where and how money is spent in our region, Transport for the South East is already making a real difference for the 7.5million people who live and work in the South East.”